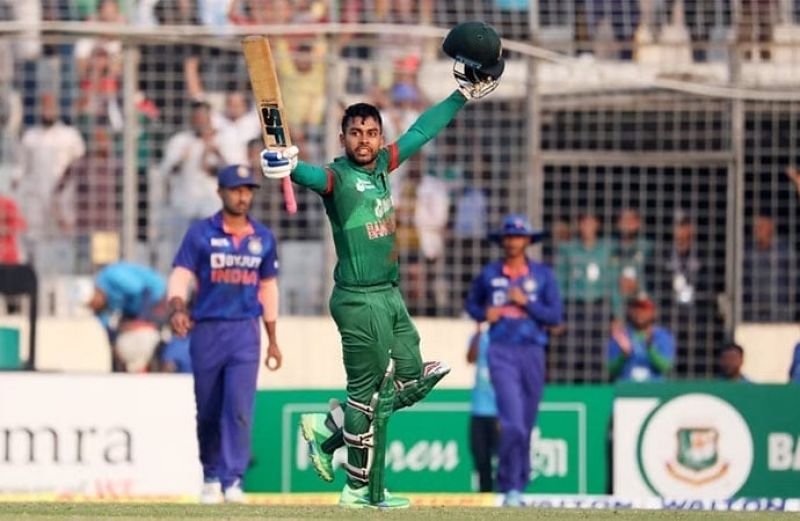 Dhaka, 7 Dec  - Mehidy Hasan Miraz hit his maiden ton as Bangladesh overcame a shaky start and a Rohit Sharma scare to beat India by 5 runs in the second ODI and sealed the three-match series in emphatic style at Sher-e-Bangla National Cricket Stadium today.

Mehidy struck an exact 100 off 83 to power Bangladesh to a dominating 271-7 after the home side was left to a tittering 69-6. The bowlers then complemented his outstanding job with a discipline bowling to restrict India to 266-9.

Bangladesh won the first match by one-wicket thanks to Mehidy who held his never to stare down the deficit of 51 runs with one wicket at hands.

It was their second successive home-series win over India, having won the last bilateral series by 2-1 at home.

Now they have the chance to sweep the series as India looked completely out-of-sort and jaded and the situation was worsened for them further as their captain Rohit Sharma sustained a left thumb injury in the match, which could potentially rule him out from the last ODI and even the Test series.

But even through the injury, Rohit who came to bat as No. 9 batter, struck an unbeaten 28 ball-51 not out, which almost sealed the deal for India. He hit three fours and five sixes in his innings. As India needed 40 runs from the last two overs with just one wicket at hand, Rohit went on bang and almost won the match single-handedly but Mustafizur Rahman who delivered the last over, held his nerve to deny Rohit and India the victory.

Mehidy started from where he left in the first game as he put Indian bowlers in sword to give Bangladesh a daunting total.

Liton Das won the toss and elected to bat first but Indian bowlers came up with fire to briefly indicate that the decision may backfire. However Mehidy didn't let it happen.

Indian however got their first blow when their captain Rohit Sharma suffered a left thumb injury after trying to hold on a catch of Bijoy. To make the matter worse, he also dropped the catch although Bijoy was out in the next delivery.

Meanwhile, Bangladesh's situation got worsened further when Umram Malik, who replaced Kuldeep Seen, terrorized them further with his raw pace. He clocked over 150 KM at regular basis in his first spell and got the reward with the wicket of Najmul Hossain Shanto for 21.

Off spinner Washington Sundar then picked up three wickets in his seven balls, leaving Bangladesh 69-6 from 66-3. From then on, Bangladesh looked to be bowled out below 100.

But inform Mehidy came in and got ably support from senior mate Mahmudullah Riyad as the duo hit the Indian bowlers all corner of the park to add a record 148 runs for the seventh wickets partnership.

However while he played with utmost confidence, Mahmudullah Riyad became the first one to bring up his 27th half-century off 74 balls, fending a Siraj short pitched delivery to leg-side for a single.

Soon after Mehidy reached his fifty off 55 balls, chipping an Umran Malik delivery to back square leg for single.

Mahmudullah failed to achieve the century after being dismissed by Malik for 77. He hit seven fours and played 96 balls.

Mehidy however continued his good work and picked up his maiden century in the last ball with a single, punching Shardul Thakur delivery to long-on.

Washington Sundar was the pick of Indian bowlers with 3-37 while Malik and Siraj took two wickets apiece.

Virat Kohli opened the inning with Shikhar Dhawan in place of injured Rohit. Kohli though started with a boundary in the first ball, delivered by Mehidy, he couldn't sustain long as he chopped an expressed delivery of Ebadot Hossain on to his stump to be out for 5.

Mustafizur Rahman took out struggling Dhawan for 8, leaving India reeling at 13-2 in third over.

Mehidy however decided to make the match of his own, as he came up with fire in bowling also. He took the wicket of KL Rahul, trapping him leg-before for 14.

And from that point, it was entire Bangladesh's game even though Shreyas Iyer resisted with a brilliant 82 off 102, smashing six fours and three sixes.

He and Axar Patel gave Bangladesh some tough times, sharing 107-run partnership. Mehidy got in to act again to break the partnership, dismissing Ieyer.

Ebadot then gave the killer punch, having removed Axar who made run-a-ball-56 with two fours and three sixes.

With India in big trouble, Rohit came to bat through his injury but just couldn't give a fairytale finish against a determined Bangladesh.
Ebadot Hossain was the most successful bowler for Bangladesh with 3-45 while Shakib Al Hasan and Mehidy Hasan Miraz snared two wickets apiece.