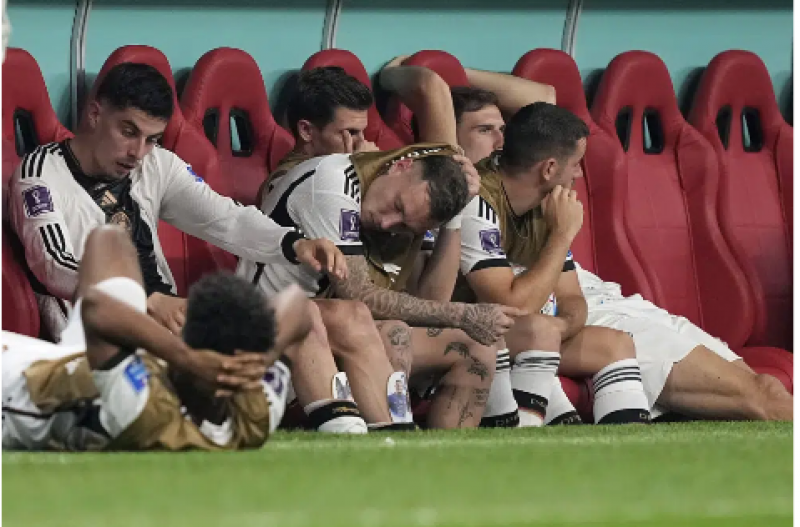 Former soccer power Germany is facing another round of soul-searching after going out of the sport’s most important tournament at the first stage for the second time in a row.

But no one had any real answers to the team’s problems.

“There are 25 experts standing together here. You can all advise each other and then agree on a few details,” Thomas Müller said after Germany’s 4-2 win over Costa Rica on Thursday.

Germany’s fate was effectively decided when it lost its first game 2-1 to Japan, then followed up with a 1-1 draw with Spain.

It left Germany at the bottom of Group E and dependent on a favor from Spain. It never came as Japan defeated Spain in its final game to top the group. Spain progressed ahead of Germany on goal difference.

“I never look at another team, it’s up to us,” Germany coach Hansi Flick said of relying on Spain. “I think ultimately the sum of everything contributed to us being eliminated. We had enough chances, whether in the first half or the first 60 minutes of the game against Japan, or even at the end against Spain, when we had another huge opportunity. You really have to take those chances.”

What Flick failed to mention is that Spain also missed a host of chances to put its game against Germany out of reach before Niclas Füllkrug’s late equalizer.

That goal proved to be the highlight for Germany though it proved to be of little worth in yet another disappointing big-stage performance.

“We haven’t been able to live up to expectations at the tournaments in recent years, because as a team, I would say we don’t really have specialists running around everywhere. We have a lot of players who are very talented. Yes,” Müller said before trailing off and leaving those at the emedia conference to finish his thoughts.

Germany, the 2014 World Cup champion, also crashed out during the group phase at the 2018 tournament in Russia. At last year’s coronavirus-postponed European Championship, Germany was knocked out in the second round.

“I think really, we can’t say where we are,” Germany captain Manuel Neuer said of the team’s place in world soccer.

Prior to the 2018 World Cup, Germany had reached at least the semifinal stage of every major competition it entered since the 2006 World Cup, which it hosted.

“I joined the team in 2016. Germany was always in the semifinal before that,” midfielder Joshua Kimmich said. “Then I come in and we’re out (of the World Cup) in the first stage and last year in the second round (of the European Championship), it’s hard to take.”