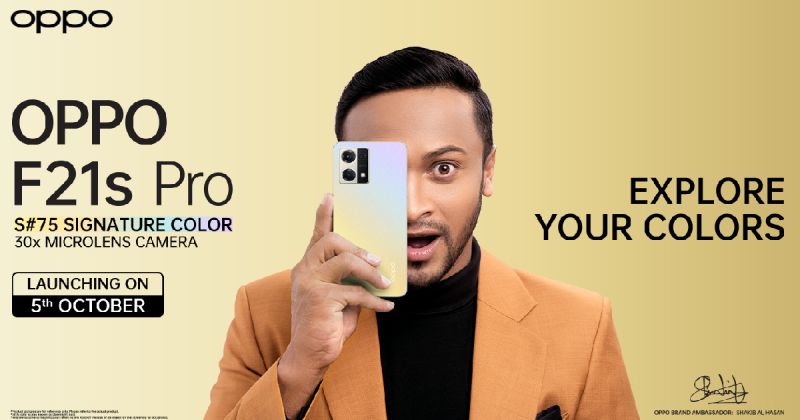 Allrounder Shakib Al Hasan has launched his signature S#75 color only available on OPPO F21s Pro which will be released in market on October5.

S#75 color combination is an embodiment of Shakib’s personality traits. The color mélange S#75 by Shakib Al Hasan tells the story of a man who not only talk the walk, but also walk the talk.

The color combination in the OPPO F21s Pro was brought to life using OPPO’s signature OPPO Glow Design technology – the brand’s own specialized production method that renovates a piece of ordinary glass to the glossy back case.

Shakib Al Hasan said, “Different people have different way of getting inspired. This new design of the OPPO F21s Pro recognizes that difference and will inspire the smartphone users in Bangladesh to explore the multiverse of possibilities within them.”

Damon Yang, Managing Director of OPPO Bangladesh Exclusive Distributor, said, “Shakib Al Hasan is an inspiration to the people of Bangladesh, because of his multiverse of cricketing talents. Just like Shakib, OPPO believes that people need something that will inspire them and help them customize their inspiration so that they can achieve their dreams”.