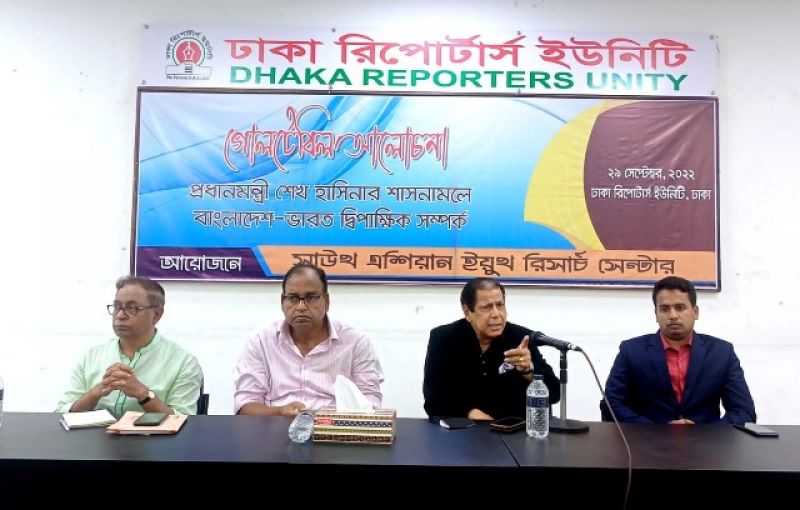 Mr. Shamsuzzaman Dudu, Vice Chairman of the Bangladesh Nationalist Party (BNP) has said that there is a suffocating situation in Bangladesh now. Awami League has destroyed all the norms of the country. India has intervened in our national election in 2014 and forced Jatiya Party to participate in the election. India's Congress, BJP and Bangladesh's Awami League want similar things.

Speaking at a roundtable on "Bangladesh-India Bilateral Relations during Prime Minister Sheikh Hasina's rule" organized at Dhaka Reporters Unity on September 29, 2022 at 10:00 am by the South Asian Youth Research Center, Dudu said, Bengalis were the first to declare independence against the British. Bengalis have the talent to compete with any nation. But it has been destroyed today. Awami League has destroyed our democracy. We have to unite to get out of this. He said, there is no doubt that the talks of private sector representatives on trade and investment issues and the Prime Minister's assurances are particularly important to attract Indian industrialists.

But at the government level, apart from the political will of the big neighbour and the assurance of further negotiations, what has been gained? Did we get any solution or cooperation over the Rohingya crisis from India, except for repeating the old assurances of cooperation? No one expected the recent visit to change the perception that we are giving more to India and getting less. He said that people's opinions should be given importance by avoiding hegemonic policy in the development of Bangladesh-India relations.

Participating in the discussion, General Secretary of the Revolutionary Workers Party Mr. Saiful Haque said that one of the biggest causes of the crisis is India's hegemonic policies. The foreign minister testified about the relationship between the two countries. India has gone beyond diplomatic etiquette and interfered in internal affairs. The confidence of the Prime Minister was not seen in her own words about the last visit. Saiful Haque said, "When we thank India and pay tribute with flowers for its role in 1971, they hang bodies on the border."

Awami League and India constantly say, 'Bangladesh-India relations are warmer than ever'. But on the border, India does not hesitate to kill people like birds. India's attitude cannot be changed by gifts of hilsa and jamdani. Saiful Haque said, we have not failed to show generosity. But they continue to treat Bangladesh as a satellite state. We want relations with them on the basis of equality and justice. Mentioning the desire of staying in power due to India's loyalty, the leader of the Workers' Party said, "If Awami League thinks it can stay in power like this, it will be dangerous."

International relations expert and former ambassador Mr. Sirajul Islam said that there have been three elections in the last 14 years. Awami League had the best relations with India from 2009 to 2014. Referring to the two cards of India-Bangladesh relations, transit and the unity of 1971, he said that strategically, India has given the name 'Connectivity' to transit. We have given them the Chittagong port in addition to that connectivity. But India has developed a relationship with a particular political party rather than with the country. This is the wrong policy.

Sirajul Islam said that one thing that seemed inconsistent was that there was no need to seek permission from India to draw 153 cusecs of water from the Kushiara river inside Bangladesh. This agreement was made for the internal water management of Bangladesh, it is wrong and a bad precedent has been set by Bangladesh. Now if India says, they have an agreement with Bangladesh. Bangladesh will be able to take 153 cusecs of water, the rest of the water belongs to India. It is important to know whether there is any mention in the agreement about what Bangladesh will do if India starts controlling the rest of the water on the pretext of this agreement. Asserting that this agreement was not fair and correct, he said that the agreement does not mention how the water and sediment of the entire basin will be managed. There is no provision in the agreement as to whether they will provide subsidies or compensation for the environmental damage already caused by the power and irrigation projects. If they take on such a project in the future, will they understand Bangladesh according to international law or not?

National security analyst Colonel Ashraf (retd) said India is our neighboring country. They never gave their fair share of water. Their position on the Rohingya issue is strange. They said they support Bangladesh and Myanmar. The oppressed and the oppressor cannot be supported together. They cannot be grandfathered as a big country. Referring to the Bangladesh-India border as the cruelest place, he said that there is no such rule anywhere to shoot criminals. India must ensure coexistence.

The roundtable was presided over by Shafiul Alam of the South Asian Youth Research Center. – Press release