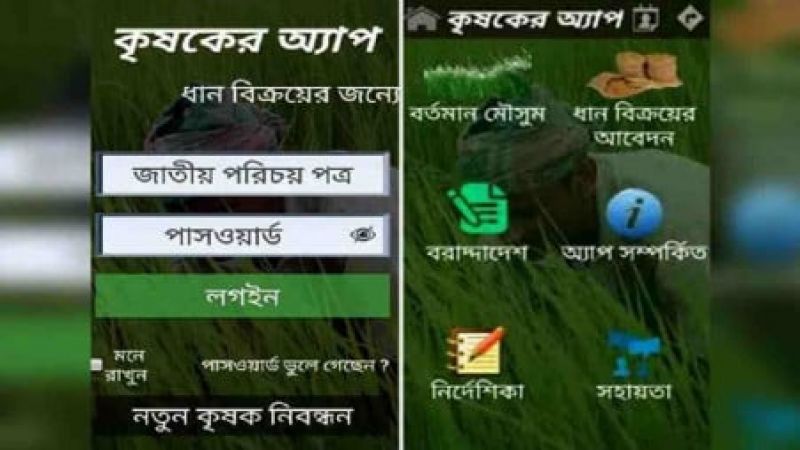 The government has expanded the coverage area of 'Krishoker App' to 272 upazilas .

The government has expanded the coverage area of 'Krishoker App' to 272 upazilas as the digital system gradually appeared popular among farmers since it was introduced in 2019 in 16 upazilas for procuring food grains including rice.
"The farmers of the 272 upazilas now can be enlisted as intending grain sellers are registering them using the 'Krishoker App'," food department's procurement director Mohammad Raihanul Kabir told BSS.
He said the decision was taken to bring the upcoming amon procurement system under the app's coverage in these particular 272 upazilas out of the country's 495 upazilas as the amon procurement is set to start early next month.
The department, however, set December 15 as the deadline for intending amon producing farmers but all farmers could get them registered thereafter in the 272 upazilas.
Kabir said the department by now issued 13-points directives to concerned food controllers field officials at upazila level of the 272 upazilas in Dhaka, Rangpur, Khulna, Barishal, Chattogram, Sylhet, Rajshahi and Mymensingh regions.
Food department officials said the system reduced the farmers' time, cost and other hassles, one being caused intermediaries interventions while it nearly eliminated the corrupt practices involving the procurement.
"It (Krishaker App) is a time saving and hassle free system which simultaneously ensured transparency in government's food procurement system," food controller at the food department director general's office Nasir Uddin said.
Approached by a BSS correspondent, a farmer of Gangni Upazila of Meherpur district Subash Chandra Ghose said the app relieved fellow farmers from different time consuming and procedural hassles which also cost their money.
"Previously we were required to visit repeatedly upazila agriculture and food offices (silos/local supply depot) to talk and pursue the concerned officials to get our grains procured . . . the system (Krishoker App) has made the process much easier," he said.
Ghose said the app helped them supply their grain directly to the government warehouses evading middlemen though initially "the system appeared a bit complicated".
"The programme is being implemented on pilot basis . . . it will cover 300 upazilas in upcoming boro season in 2022-23 fiscal year", a food official said.
The government has fixed a target of procuring 5 lakh tonnes of amon rice and 3 lakh tonnes of amon paddy from the farmers all over the country.
The price for procuring the rice has been fixed at Taka 42 per kg and Taka 28 for paddy, according to the food department.
The farmers could download the 'Krishoker App' from Google play store using their mobile phone numbers, passwords and National Identity numbers (NID).