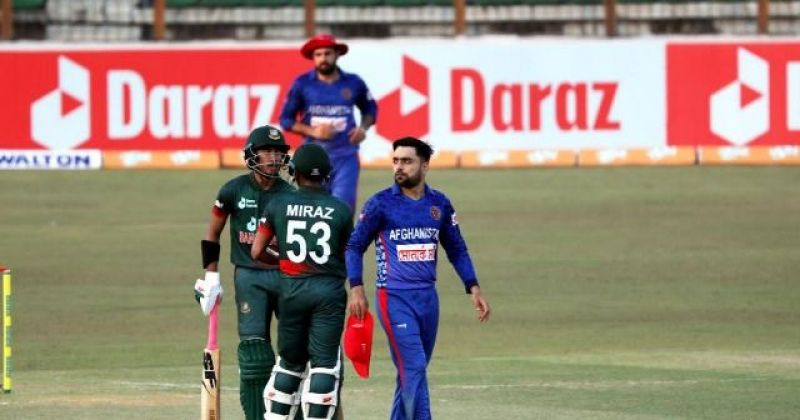 Tigers fought their way to victory in the first ODI against Afghanistan on Wednesday, Feb 23 2022

Dhaka, Feb 23 — With six wickets down under the 50-run mark, Bangladesh successfully chased down a target of 216 against Afghanistan riding on an outstanding partnership of Afif Hossain and Mehidy Hasan Miraz on Wednesday in Chattogram.

With an imperious partnership of unbeaten 174, Afif and Mehidy guided Bangladesh to a 4-wicket victory in the first match of the three-match series— one of their finest victories in the format.

Afif and Mehidy set a record of the highest seventh-wicket stand for Bangladesh in ODIs. They surpassed the previous record of 127 by Imrul Kayes and Mohammad Saifuddin.

It was Afghan young pacer Fazalhaq Farooqi who put immense pressure on Bangladesh taking four wickets early. Bangladesh lost five wickets in just 28 runs, and four of those wickets were taken by Farooqi who was playing only the second match of his career.

The other two wickets that Bangladesh lost were taken by Mujeeb Ur Rahman and Rashid Khan— two of the strongest weapons of this Afghanistan setup.

When Afghan players were overjoyed with the prospect of a big victory, Afif and Mehidy paired up and put up a resistance that was never broken.

During the early overs of the partnership, both Afif and Mehidy were steady. They played the balls with extra care so that they wouldn't push the team into further trouble.

Afghanistan bowlers tried so many things to break the stand, but their efforts went in vain.

Earlier, the tourists have won the toss and opted to bat first. They failed to have a good start as the opener Rahmanullah Gurbaz fell  to Mustafizur Rahman early for seven of 14 balls.

However, in the middle overs, Afghanistan batters were firm. Najibullah Zadran hit 67 before being dismissed late in the innings.

Rahmat Shah was the second-best batter for Afghanistan in the innings scoring 34.

Afghanistan scored 63, their best stand in the innings, in the fifth-wicket stand shared by Mohammad Nabi and Najibullah Zadran.

However, they failed to do well in the last 10 overs when they added only 47 runs losing the last five wickets, and eventually, they ended up on 215 all out in 49.1 overs.

For Bangladesh, left-arm pacer Mustafizur was the best bowler taking three wickets conceding 35 runs while two other pacers— Taskin Ahmed and Shoriful Islam— bagged two wickets each along with Shakib Al Hasan. Mahmudullah Riyad bowled one over and took a wicket too.

In this match, Bangladesh fielded Yasir Ali Rabbi— the debutant from Chattogram. Before getting his ODI cap, Yasir played three Tests. He also played 77 List-A matches and scored 1878 runs with two centuries and 11 half-centuries. He, however, failed to justify his place in the first chance as he suffered a duck and put the team into trouble.

It was Bangladesh’s first ODI in eight months. The Tigers played their last ODI before this series in July 2021 in Zimbabwe.

The remaining matches of this series will take place on February 25 and 28 at the same venue. - UNB